Coach Baseball Right created Start Baseball Right: The Alternative Tee Ball Game to help parent-coaches make their kids' introductory experience with baseball more fun and engaging. The problem is that to most people who don’t know baseball well, all they see is a bunch of standing around and it can appear slow at times.

The truth is an incredible amount of thinking and even more exciting plays that can happen! To develop this level of an appreciation, love and understanding of the game of baseball takes a lifetime. Unfortunately, baseball faces a new challenge. Getting kids to stick around for these great moments. The key to this success is to start kids off with a great and fun experience!

Never before has life offered kids so many other alternatives to do things.

I had lunch with a mom of a 7 year old that told me, “my son loves to play baseball, when its his turn…when he’s not up to bat he’s bored out of his mind and playing in the dirt not paying any attention to what’s going on.” Our friend John O'Sullivan at Changing the Game Project writes about "Why Kids Quit Sports? on his blog here.

If you were a kid in today’s world, what would you rather do, play the newest and greatest video game in air conditioning or go to the ballpark on a 90 degree day and be uncomfortable and bored standing around waiting for ‘your turn’ as the baseball coach hits one ground ball at a time to the entire team. That’s great for the player that’s fielding the ball, but for every other kid they are just standing around not doing anything…being bored and thinking about how they would rather be playing video games or doing something else.

We have to give our kids a better first experience with the game.

Otherwise, they will get bored and move on to something else before they give the game a chance. So its our mission to give parents and coaches the ability to have fun, fast paced practice that leave kids excited to get to the next practice. This gives us the best chance at keeping kids playing baseball, and taking the love of the game to new heights.

Your entire organization should rethink this game and reimagine it so that kids are actively involved and the game is more fast paced. To help, we do have some good news! At Coach Baseball Right, we have the solution.

A New Way to Introduce 4 to 6 year olds to Baseball! It's Not Tee Ball

Start Baseball Right: The Alternative Tee Ball Game is a 60-minute experience that teaches fundamentals, allow players to play a quick paced scrimmage where they learn to hustle and start to think a play ahead. It will also teach different parts of the game by breaking the game up to “snippets” and allow them to compete and learn at the same time.

Kids will have a blast! No doubt they will want to continue to play baseball the next time! So your organizations and leagues will see kids coming back again and again.

We suggest to replace both practices and games with Start Baseball Right because as you will see in the structure below it merges both practice and games together. We recommend 8 week sessions, if your "tee ball season" is longer than that, then have multiple sessions. Any questions, please do not hesitate to contact us.

The coaches/helpers should have some basic knowledge of the following practice structure three 20 minute "snippets of the game": Drills, Quick Scrimmage, and Fun Games.

Introduce these youth baseball drills to kids and keep them moving! Quick pace! The objective is not on mastery at this point. 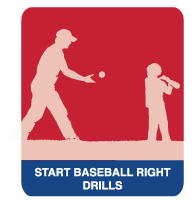 Start Baseball Drills videos can be found here or you can follow the outline below.

Engage them. Keep them moving! Quick pace! Have them hustle wherever they go. No walking. Be talking with each player about what happens. The objective is not on mastery at this point.

Put common, small parts of the game into competition that is fun. Get kids excited by having them cheer or embellishing calls. This is your last chance to get them to smile, laugh, and learn so they come back wanting more. 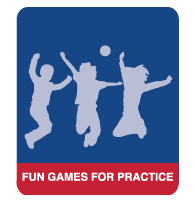 Explanatory Fun Games for Baseball Practice videos can be found here or you can follow the outline below.

Base Hit to Left Game

1st to 3rd Base Running

Share this Game with your Organization Administrator and Community