Organize into lines behind bases, 3 to 4 players per line. The players will watch an assistant coach/helper or another player.

Reading the Pitcher (use a coach, helper, or player as the pitcher)

Reading Lefties (use a coach, helper, or player as the pitcher)

Organize players into 2 groups of partners (throwing and receiving). We suggest using one of the foul lines in the outfield as a marker for one  set of partners.

Ready Break Throw with each other

After they have done this, save about 2 minutes to have them try to implement these techniques on their own by playing catch by themselves. No more than 2 minutes!

Depending on your team’s level and age, you can either rotate these drills among all your players (ie do infield first, then catching, then OF) or (CBR.com’s recommendation) divide your players into the positions you want them to play.

Coach you will lead this by placing all the players into all the positions on the field. You may want to have another coach/helper do the baserunning. This way the players can visually see what the real game situation will be like.

Runner on 1st base; ball hit to any outfielder (OF). OF will throw one base ahead of runner. Throw to 3rd base, the shortstop (SS) is cut, Third baseman (3b) to 3rd base, Second baseman (2b) to 2nd base, First baseman (1b) to 1st base, pitcher back up 3rd base, all the way to the fence.

To teach this, set up a small field with 30 foot bases, and walk the kids thru this without using a ball

Put 3b coach into the drill and as the players rounds 2b he picks up coach. Runners run full speed around 2nd base anticipating coach will bring them to 3rdbase. If the coach stops the runner, then runner will get back to 2nd base and look for ball.

Batting practice – try to have multiple players hit at same time. You could have 4 groups of 3 hitting in different cages.

Throw batting practice from 30 feet using L screen. It is fine to use a front toss early in the season and do the below sequence.

When throwing a bullpen, try to have pitcher block the first half of pen and throw to

Imaginary hitter during the second part. Blocking means throw 3 pitches at a spot and take notice of how it feels to get the ball where you want it to go.

Now the pitcher will throw to imaginary hitters ( 2 hitters at first) and this will be charted. Keep the bullpens  to 30 pitches when you start out.

One hopper hit back at pitcher. With nobody on or 2 out, the pitcher will run this

*most of the drills are available for free. 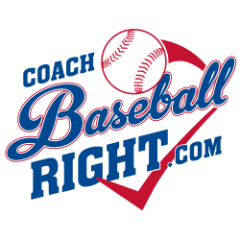